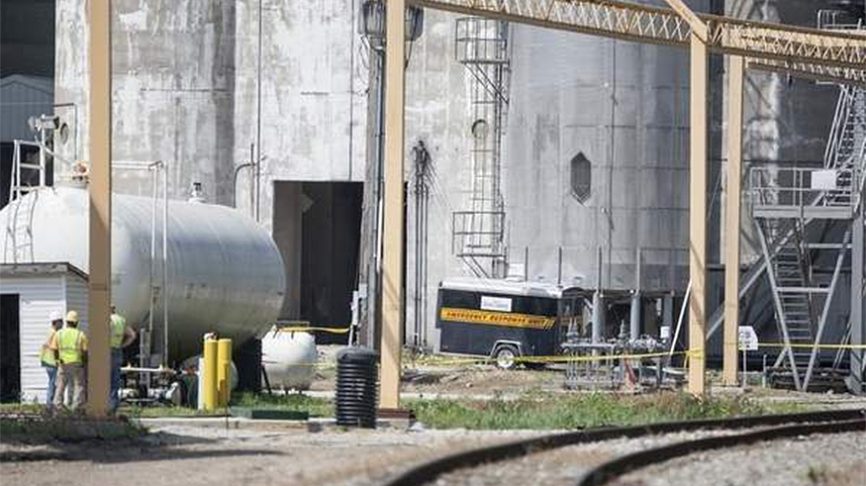 An explosion inside a grain silo at a farming co-op serves as yet another reminder as to how deadly and dangerous combustible dust can truly be if it isn’t properly maintained and proactively secured for explosion-proof safety.

The accident happened this past Monday at the Union Mills Co-Op in the northwestern town of Union Mills, Indiana, located just 50 miles south of Chicago. The state’s Occupational Safety and Health Administration is currently investigating what exactly set off the explosion, but it’s suspected as of press that grain dust is to blame based on the location of the damage and subsequent fire being limited to the concrete silo next to a railroad track on the facility’s grounds. The victim in the deadly blast was a 67-year-old employee at the Union Mills Co-Op whom is believed to have been working in or near the silo when the accident occurred. Other injuries were reported, but none were serious enough to require medical attention.

In an interview with Journal and Courier, Purdue University farm safety expert Steve Wettschurack told the publication that concrete silos in particular can create a dangerous situation “because they seal so tightly” and that “a small spark, even from someone using a hammer, can set off a blast” when surrounded by highly volatile grain dust. An OSHA spokesperson says that Union Mills, an Avon, Indiana-based supply and marketing cooperative owned by farmers serving rural parts of Indiana, southern Michigan and Ohio, has no record of past safety violations, but something clearly went wrong on June 24th to cause this level of devastation.

According to OSHA’s official website, there have been more than 500 explosions, 184 deaths and 677 injuries over the past 35 years across the nation’s grain-handling elevators, with grain dust being cited as the main culprit behind these incidents. Here at Dust In Case, we’ve discussed grain dust’s combustibility, as well as outlined the responsibilities manufacturers and facilities working with combustible dust should enact on to prevent them from reoccurring, including educating and training workers. Ultimately, an understanding of safe housekeeping and using the right explosion proof vacuum cleaner is your front line defense in combustible dust explosion prevention.