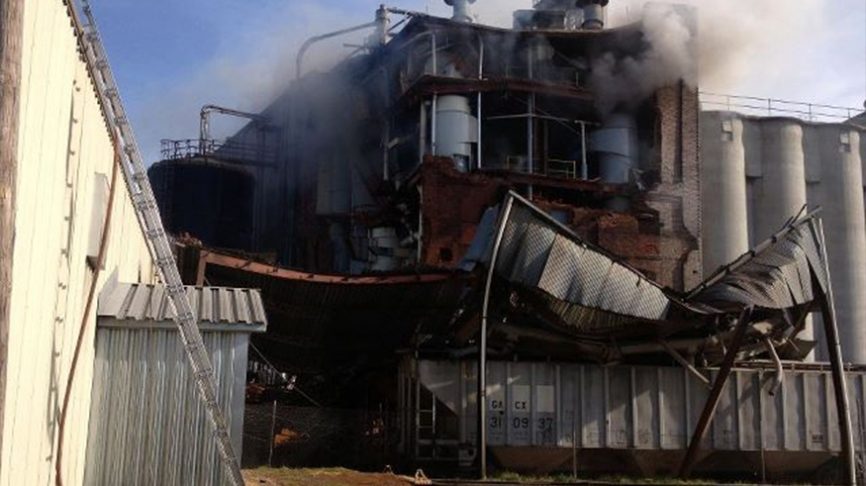 Since 2011, the Bartlett Grain Co. has been under OSHA’s microscope following a deadly grain dust explosion inside a silo elevator at their facility in Atchinson, KS which killed six workers. Combustible dust woes might be mounting for the embattled grain manufacturer as yet another plant of theirs – this one based in Statesville, NC – was rocked by a possible flour dust explosion that occurred on April 7, 2013, blew out the entire brick side wall of the complex and sent one employee to the hospital with serious injuries. The final determination of the explosion is still under investigation, but Tim O’Connor, the executive director of non-profit organization the National Council for Occupational Safety and Health, told the area’s local news affiliate WSOC that he suspects an accumulation of flour dust is to blame because of the combustible nature of the application.

If this does turn out to be true, it will be another headache for Bartlett Grain, who Dust In Case last reported might be facing criminal charges for failing to prevent the 2011 accident on top of being levied $406,000 in OSHA fines and ongoing investigations by the regulatory board. Bartlett is refuting claims that combustible dust hazards caused the accident, going as far to hire a group of experts to disprove OSHA’s allegations. This latest chapter could however add to OSHA’s case that Bartlett has been willingly negligent in their handling of combustible dust within facilities and continues to disregard proper safety precautions.

With every incident, there is the obvious reminder that combustible dust requires proper handling (such as removing it with an explosion proof vacuum,) training and a full-proof housekeeping plan, but in the case of Bartlett’s Statesville flour mill, there comes a stark warning that a company’s past negative reputation can define similar investigations in the future.